About 6 months before we started trying to conceive, I got the baby fever. I read book after book, sometimes during my lunch breaks. My coworkers caught on. Most of them laughed, but some had a wealth of information. One coworker told me to watch “The Business of Being Born”. I was instantly hooked on having a home birth, which lead me to Morning Star.

When we found out we were pregnant in August, I set up a consultation with Morning Star. I met with Rachel and felt an instant connection. I knew this was what I wanted to do for our baby. I explained to our family and friends our plan to have a home birth and very few were for it in the beginning. Most were set in their ways of the “normal” hospital birth. We explained how the home birth would work and some relaxed, but others were still skeptical. Little did we know we were going to be far from our plan come delivery day.

My pregnancy started really easy, like too easy. I had mild queasiness, even with working in a kitchen. During our check-ups everything went well. Much to our family and friend’s disappointment, we decided to wait to find out the gender. My husband, Andy, knew from day one that our little one would be a girl. I had no gut feeling on the gender during the entire pregnancy, but I was hoping Andy would get his little girl. I did have a feeling that the baby would come after our May 1st due date.

We made it through the winter, the holidays, and a wedding before I really had any issues. The baby’s head was resting on my pelvic bone. I started going to the chiropractor to help things out, but the little one would not budge.

During one of our Morning Star appointments last winter, as we waited to see Vicki, we had a nice talk with Paula that would shape the way I went through labor. She talked about relaxing through the contractions so your body can stretch for the baby. If you tense during a contraction, you are fighting your body’s need to relax and open. Needless to say that was easier said than done.

May 1st came and went with no baby in site. Vicki was very patient with finding ways to kick-start labor as I was only 1cm and 20% effaced. I tried pineapple, oatmeal, nipple stimulation, and any other remedy that we heard about. At week 41, we needed to perform a non-stress test. Vicki called the hospital in Eau Claire, but they wanted us to be induced that day if we went in. Vicki found an alternative doctor for us to do the test, as we wanted the baby to come on their own.

At week 42, I was still 1cm and 20% effaced. Vicki stripped my membranes and recommended I try castor oil – which I would not recommend to anyone. It tasted like liquid Chapstick and still makes me sick thinking about it! The next day, Friday, we had another non-stress test. The ultrasound revealed 6mm of fluid around the baby’s heart and the absence of visible respiratory activity. We were told to go straight to the hospital to be induced. After discussing the results with Vicki, who had been in contact with the center where the ultrasound was performed, it was discovered that the radiologist had misread ultrasounds before. I had been feeling plenty of movement, and my gut said the baby was fine, so we decided to wait.

During a conversation with Rebecca that Saturday, she told me to try acupuncture as a method of induction. I am kind of a baby when it comes to needles, so we started with acupressure and some herbs. After a while, they talked me into trying one needle. Before I knew it, I had 12! I felt very relaxed after the session. I went home and was ready to have a baby!

On Sunday, Vicki recommended we try a catheter. I drove the 30 minutes back home and felt horrible. Contractions started coming every 5 minutes. We were excited that things seemed to finally be starting; however, the contractions slowed to 10 minutes, then 15 minutes apart. Only 3 hours after they started, they were gone.

On Monday, I felt defeated; I was ready to give up. At 42 weeks and 5 days, we talked to Vicki about being induced at the hospital. I am beyond grateful to Vicki and Andy as they were up until midnight on the phone trying to get things in order. First, Vicki tried the hospital in Eau Claire we originally wanted. They told her “We told you to induce her 2 weeks ago, so we are in charge now.” Andy and I did not feel like arguing with the doctors, so Vicki recommended we try the Hospital in Hudson. She contacted a doctor in Hudson, but he said he could not take our case. If there was in fact fluid around the baby’s heart, they would not have the facilities to care for the baby. He said that we would have to go to Saint Paul. Andy came up with a solution the doctor liked. We would do another ultrasound with a different technician, and if that ultrasound was unremarkable, he would take our case.

On Tuesday morning, we scheduled the ultrasound. We asked for a veteran radiologist to mitigate the chances of any mistakes. The result was only 3mm fluid around the baby’s heart, which is within normal parameters. After he had a chance to review the new ultrasound results, we called the doctor in Hudson, and he agreed to see us that day for a consultation. We drove the hour from Eau Claire to Hudson. They were able to squeeze us in between other appointments. He said I was 4cm and 20% effaced. We scheduled an appointment for the following morning to perform our induction, and he stripped my membranes for the second time. As we left, I remembered something Vicki told me – once you give up, the baby usually comes. I was hoping that would be true since I still wanted the home birth.

Wednesday May 22nd came quickly - it was officially 43 weeks. At 7:30am they started pitocin. Our nurses were wonderful and helped us get as comfortable as possible. They not only tended to me, but to anything Andy needed as well. I tried to rest, but, with all of the excitement, I only managed to sleep for 15 minutes. At 1:30pm, the doctor came to check on us. I wasn’t having any contractions, and no progress was being made. This baby did not want to come out! We decided to break my water. Contractions started shortly thereafter, but were manageable. After a couple of hours, they began to escalate. I relaxed as much as possible in the Jacuzzi tub. I started experiencing back labor. Rebecca showed up and showed Andy some ways to help me with the pain. All that I could think about was the conversation I had with Paula. Relax through the contractions, and things will go faster.

Around 6pm, Vicki showed up to relieve Rebecca. At about 7pm, I had to get out of the tub. I was shaking, exhausted, and hoping for a baby soon. The doctor came at 9:30 and said I was dilated to 7cm; he would come back in an hour to check on us. Around 10pm the nurses ran out to find the doctor since I was starting to push. At 12:11am on Thursday May 23rd, I heard the doctor say “What do we have daddy?” I think Andy was in shock because he just stood there and said nothing. He had so many emotions on his face – overwhelmed, pride, excitement – he was speechless. They placed a beautiful baby girl on my chest. I had no words at that moment; I just stared at her. She was so beautiful.

The hospital staff let us hold and snuggle her while the cord stopped pulsing. Andy was beaming while he cut the cord. They took our little girl away so she could be checked out. Being born so late, they wanted to make sure nothing was wrong. Due to a small tear, I needed a few stitches. But soon they brought me our perfectly healthy 8 lb, 5.5oz baby girl, Olivia. Vicki stayed for a short time before she had to get some rest. She came to check on us the following evening to make sure our first night went well.

After talking with my family, I discovered she was the 3rd baby in the family to be born at 43 weeks. My uncle’s due date was also May 1st, and he was also born on May 23rd. They are 48 years and 2 minutes apart. Although I am happy with the way everything went, I am disappointed to see that chapter coming to an end. The whirlwind of a first child has only just begun. Our baby girl joined the world with her own story, not the one we had planned for her.

Olivia is now 3 months old. People ask me if I am ready for a second baby. Though I tell them “no”, there is a part of me that is excited. I am excited to join the Morning Star family again with the hope that our second baby will be born at home with our loving midwives by our side. I cannot thank each and every one of the Morning Star staff members enough as they helped us in so many ways. I cannot wait to see everyone again when we go for baby number 2! 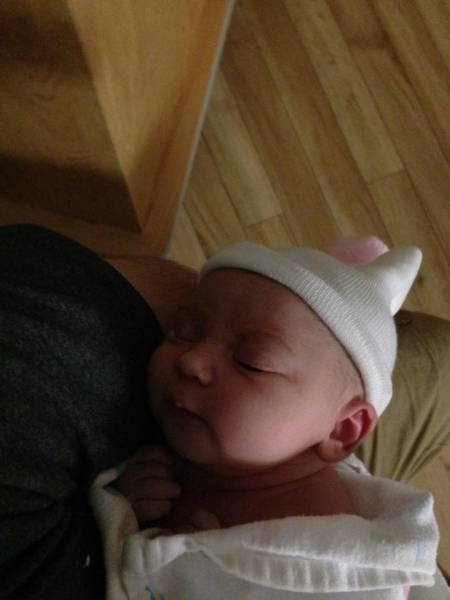