Said landlord requests that said fetus clear the premesis no later (but preferably before) August 15, 2006, Year of Our Lord. Landlord expects fetus to make every effort to leave peacefully via proper channels, exiting southward through birth canal and not busting through landlord's womb like a mascot ripping through a team poster, as is currently being attempted. Landlord also requests fetus remove current furnishings along with self, including placenta and umbilical cord, amniotic fluid and any old couches fetus may have picked up in the alley during his/her stay. Landlord understands the mighty pleasures her womb must offer, but invites fetus to participate in the larger party on the outside: 'It's more fun out here. I promise!"

I don't know how many of you have carried a baby in your womb longer than 40 weeks, but those who have know that time loses meaning in the measured sense, especially if you are committed to letting the baby decide when s/he will make their appearance. You also have a real understanding of the term "great with child." I was pretty sure of our conception date and also pretty sure of my burgeoning silhouette, hence I was very sure that despite Paula's calm ministrations my baby was LATE and wanted OUT. It was hot, too. Really hot. Sticky hot. The fat Fred Flintstone feet were tired. The mama was getting desperate. It was a little silly what we tried in order to meet our babe: spicy food, a few stiff drinks, acupuncture. My husband Jay saw more bulky-awkward bedroom action then he had in months. I cried all over my darling midwives. I had days of calm and good humor, when I'd actually saddle up and ride one of my horses, trying to trot the baby out, and days when I laid on the couch in a hormonal, glassy-eyed funk.

Then on the 14th day past my due date, the day we had some tests scheduled at the hospital to make sure everything was still okay in there, my water broke slowly as dawn melted in to morning - a warm, welcome relief. At first, I laid there in stunned silence, knowing finally that I would not be suspended in my swollen state, that the child was going to find his or her way. We called my mom and dad, who came to our farm from the cities. We called Paula, who had me checking for signs of infection and timing my contractions. We played a game of Scrabble through the contractions out on the deck. Despite my not-so-delicate condition, they didn't let me win, I remember that. The heat had broken and it was a beautiful day. We drank lemonade and ate lots of good snacks. I remember at one point looking out over our farm, drenched in  vibrant green life, and thinking that soon I'd be sharing it with my little one. It was wild to think that Jay and I would leave two and come back three.

I called Paula when the contractions got stronger. She told me it will be time to come to the birth center when Jay was calling me about the contractions because I wouldn’t be able to talk on the phone. That time came pretty quickly, and by 2 p.m. or so we were driving the seemingly interminable distance to Menomonie. When I arrived at the birth center, dear Krista met me with a big hug, and even though my contractions were pretty strong by then, I was flooded with joy. Paula and Karen were there too, and I was glad.

After a few minutes of laboring and talking downstairs, for the third time in my life I threw up - a sign that hard labor was nigh. And oh, was it. Jay and I went upstairs and got into the birthing tub and that's when my birthing Id made its appearance. By all accounts, I had a powerful labor. The baby was hung up in my pelvis, and the contractions reached a place where they were coming without breaks. It was a stretch at first for me to realize that my stoic Scandinavian self would have to give way to the (significantly noisier) cavewoman within. Indeed, windows at the birth center would need to be closed.

For my birth I had packed a bag that included a massage wand, essential oils, CDs, snacks and a Scrabble board for me to play "between contractions." I'm not sure that bag ever even got opened, because Jay and I were working hard together, in survival mode, for several hours from the time I got to the Birth Center. I believe I entered an altered state of some sort, perhaps my body's way of coping. We labored in the tub and on a bed, spooned tightly together. Paula checked me and determined in her birthing woman wisdom that the baby needed help moving down, so I started to walk the stairs. Two at a time. This was my toughest job yet. Jay was with me. I struggled, because hard labor is not conducive to climbing stairs. In fact, it feels wrong. I pushed my way up and down the stairs, and then suddenly I was pushing the baby. On a stool, against Jay, against Paula, and in the water again. And my own mother and my sister and the midwives followed me with food and drink and cold cloths for my head. And my husband was baptized by most body fluids you can think of, and continued to hold me, holding firm. And the pushing felt good and hard and regular, and my body knew what it was doing, and I was happy because I was doing and not just enduring. Though I was drained, I had purpose and the baby was coming and I could do this.

Owain Atticus Nordlund Collins arrived peacefully amid the tempest. In fact, they even had to rub him down a bit to get him squawking, which is what often happens within the liquid calm of a water birth. When I look at the pictures, I hardly recognize the blonde amazon propped against her husband in the tub, too weary to cry, babbling to her big, healthy child. She looks strange and powerful. She looks to have received an ancient gift. 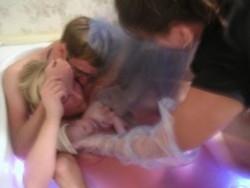