There are few things in life that are certain, but one thing's for sure.  You can't predict when babies are born.  At least without any type of confidence.


This past March there was one thing for certain – I was going to have Baby #3.  I was predicting that it would be born about a week after my March 12th due date. Every body else was predicting that I was going to have my baby any day, because our upstairs bathroom was completely torn apart, you know, Murphy’s Law…ok, so we did have a working stool, sink & bathtub, but I really like to stand in the shower during labor, which was what my husband was trying to install, it just wasn’t finished yet.

Having full faith and confidence that it would be done by the time the baby decided to make an appearance, I ignored the usual after-dinner contractions simply as the result of over-doing it with Fiona (almost 4 at the time) & Castle (almost 2).  Around 7 I was so tired I announced to Jake that I was going to bed. Castle was asleep and Fiona was running around the house “making food” and wearing one of the weird outfits that almost-four-year-olds put together.

I sat in my bed, leisurely checking email and looking up stuff online…before I knew it it was 9 p.m., I noticed then my contractions had not stopped. They didn’t hurt.  They were getting regular.  Oh! I realized, this is it!

“Jake?  You’re going to have to come up here.” No answer.  It was a  Thursday night,  meaning Jake was busy doing payroll for our business.

A few minutes later, chuckling to myself, I called out again. “Jake, we’re going to have the baby tonight.”

That got a reaction.

Knelly: Super, come on over here so you can watch Fiona and Castle – you better bring Maggie (my future sister-in-law). I’m not sure how long it will be, but it probably won’t be longer than a day.

Josh & Maggie show up around 11:30, packed like they are headed for a weekend away.  I was chuckling to myself as Jake and I threw a bunch of clothes & our birth kit (which arrived that day, luckily) in a plastic laundry basket.

On the way to Josh’s house, we stopped by Hyvee and stocked up on bacon, eggs & strawberries, which is what I crave before I start labor.  My friend Elizabeth told me this week that strawberries have an amazing amount of something that prevents muscle fatigue, so listen to those cravings, ladies. I eat about a pound of strawberries in early labor.

We cook a feast of bacon and eggs, Paula shows up from Menomonie around 12:30.  She checks me and announces, “Well, you’re at a 2.”

Sorry, Paula.  Paula, mind  you, has just finished attending the birth of my niece, Elaina, earlier that day and is very tired. In fact, I have never seen Paula more tired.

Coincindentally, Paula’s mother is in Rochester for an appointment at the Clinic, we decided that she go spend the rest of the  night at her mother’s hotel room, and we’d see each other in the morning.

I slept through contractions that were about 5 minutes apart, very steady, but they did not hurt.  My husband slept, and I never cried out, I never grimaced.  I kept reminding myself what Ina May had told me a few months before, and kept my face, mouth and lips very loose.

At 6:30, Paula called to check in, and I told her whenever she was ready to come over, she could, but I didn’t think I had made much progress.  I never felt that the real work of labor, that I had known with my other kids, had started.

She arrived around 7, and told me that I could push the  baby out.  I was pleasantly surprised to say the least.  My body was able to rest, while Jake ran down to our restaurant to unlock the door and start his bread, and by 8:25, we watched our baby boy come
into this world.

Jake whispered in my ear, “His name is Melvin.”  And I knew he was right.  Melvin was Jake’s grandfather, his middle name would be Benedict, after my grandfather.

This birth was unexpected, unlike what anyone would expect.  A homebirth, away from home, virtually painless, in perfect timing.  But maybe, we should change our expectations about what birth is.   I know I have.

By the way, Melvin has red hair. 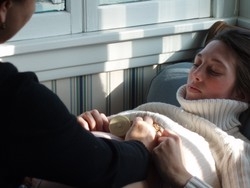