We were past due by about five days and we went into the birth center to check in with Paula and discuss options. I decided that we should go ahead and sweep the membranes. I was unsure that this would get the ball rolling, but I was ready to give birth. No disrespect to my children, but being pregnant is not really my cup of tea. It's tough stuff carrying around a lot of extra weight, dealing with the hormonal changes and dressing yourself once you get as big as a house. After we left the birth center we had a few errands to run in Menomonie. Since we were having a home birth (our first child was born at Morning Star), I didn't want to dally, but my husband, Mike, needed to pick up a few things at Fleet Farm. We got there and I decided to go in with Mike and our son, Walt. Within five minutes of wandering around the store, my sense of smell became very acute and intense. If someone had been eating a cheeseburger at the other end of the store I could have smelled it. All of the plastic packaging and different chemical smells were starting to make me nauseous. We had to make a bee-line for the checkout counter and head home. I knew things would be starting to progress.

We got home and settled in. At about 7:45 pm I started feeling minor contractions, but they were not coming at regular intervals. About an hour later the contractions were starting to become more frequent and consistent, about nine minutes apart, so I called Paula. She asked me a few questions and told me to call her back when the contractions got to be five minutes apart. In the meantime she would get in a power nap. By 12:30 am, as Mother Nature would have it, contractions were about five minutes apart, so I called Paula. I have to back up here and share the comedy that went on during this labor. While I went through contractions, Mike was going through a male form of nesting by running around the house scrubbing here and there before the birth team arrived. He claims he was trying to keep busy, but I could see right through him. He was just as frantic before Walt was born. Also, during contractions, Mike was talking to me, asking me questions and trying to make conversation. He soon realized that I was not in the talking mood after I told him to shut up several times during contractions. Me, I just wanted to be left alone. I appreciated my husband so much, but talking about this, that and the other thing while my gut feels like an elephant is stomping on it doesn't help.

The birth crew arrived by 1:30 am and they were ready to go. Paula and Krista checked the baby's and my vitals during labor, while Erin fanned me during contractions. I felt a little bad, because we had all of the lights off and candles were burning, which is a tough atmosphere when you're trying to stay awake. I labored all over the main floor of the house, but couldn't decide where I really wanted to be. By about 4 am, Paula pronounced my cervix fully dilated, but I had no urge to push. At one point I asked them if the baby would come out if I didn't push. Paula, in a soft, calm voice advised that some pushing would be a good thing. I was tired by now and looked for comfort between the contractions which were very close together by now. During a contraction I used a breathing technique that seemed to divert the pain away, but now Paula told me that I needed to use these contractions to push the baby out. But, we had a problem…

Somehow, after my cervix became fully dilated, a portion of the cervix became swollen and I was having trouble pushing Charlie's head past this inflammation. Paula ended up pushing the swollen part out of the way during a couple of contractions. I was ready for business, but I was still pretty tired. I was unable to keep fluids down for most of the night and was getting progressively more dehydrated. In the back of my mind I had concluded that the best place for me was on the toilet. I could rest and continue to push. Mike came in and I asked him to lend me his arm. As I pulled on his arm during contractions, baby Charlie and I worked on his arrival. Paula came into the cramped little space and told me to get up off the toilet, because the baby was coming. Mike had to lift me as she caught little Charlie, who came out with his amniotic sac still intact and the umbilical cord wrapped around his neck. Some say that being born in the sac is the most gentle way to be born.

Paula, Krista, Erin and Mike were an amazing birth team. I cannot say enough about how empowering and beautiful a natural home birth is. 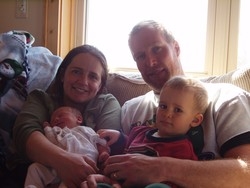