Our beautiful son, Hung  Isaiah Nguyen, was born on May 1st, following one last April thunderstorm, but the story of his birth began long before.  In November 2003 my father-in-law lost his battle to liver cancer and my husband, Hoa, promised him that our first born son would carry his name, Hung, a Vietnamese name meaning “brave”.  Years later we were ready to start our family but tried unsuccessfully for many months.  In July 2006 we received a call from Hoa’s cousin in California, a very religious man, who told us that we would find out the next month that we were pregnant, and that it would be a boy.  Lo and behold, we did find out we were pregnant the next month (on our four year wedding anniversary) and discovered that our due date was April 20th, my late father-in-law’s birthday!  We were so excited and Hoa’s daughter, Keriea, was the first person we told.  When we told my mother-in-law, Mai-Que, she was shocked (apparently she had given up hope for us, thinking my husband was “too old”, at 38!.)  Within an hour the entire Nguyen family had heard the good news.  My family was equally excited.

The pregnancy went well, despite a very strong aversion to tomatoes!  We chose to do things as naturally as possible with limited testing/intervention and chose Paula as our midwife.  We planned to have the baby at the birth center (with a slight possibility I could talk my husband into doing a home birth!)  As a chiropractor I have specialized in pregnancy and pediatrics so it was fun to finally experience all of the enjoyment of pregnancy for myself.  (I can’t imagine not having chiropractic care and massage throughout pregnancy!) We went through all of the birthing classes and early home care and handling complications….we spent a lot of hours at the birth center!  I knew a lot of the information (and my husband thought he did) but it was good to be learning together.  I prepared for birth by reading Ina May’s two books (we had heard her speak at Stout).  I set out several articles, books and information for Hoa to read (he didn’t read any of it, I‘m sure many of you can relate!).

Even though we were due in April, I had a feeling I would go past my due date (my twin sister went ten days “over” with both of her children).  In the office pool I surprised everyone by having the latest date on the list, May 1st, because I figured I would go into labor on a Monday night after working all day and have the baby on a Tuesday (I won the office pool!).  At some point in the last month of my pregnancy my husband decided that a home birth would be “ok” and we started the preparations (ordering a birth kit, etc.).  Hoa got quite involved in the preparation for birthing at home, he even did a craft project, making up two glass vases with rocks and floating rose candles for me to focus on during labor in the tub.

April 30th was a Monday like any other, until I went home for lunch and discovered “bloody show”.  I’ve never been so excited to ruin a pair of underwear!  I called my sister, Erin, who was staying with my mom in Rochester, MN, since Friday (she had a Sweet Adeline’s competition on Saturday and figured she might as well stay in town - she lives in Grand Forks, ND - if I hadn’t had the baby yet because it had to be sometime soon!)  We decided she would come to Eau Claire that night, just in case.  I gave Paula a call with a “head’s up” about the potential start of labor but my husband and I kept it a secret from anyone else.  (It was kind of fun having “labor” as a secret!)

I finished the work day with no intention of being there on Tuesday.  I met my husband at home and we went out for one more “last supper before the baby”.  We chose Mexican food (which I regretfully tasted for many hours after).   I did my paperwork and noted that contractions were coming inconsistently from about 8pm until 10:30pm.  I called Paula with an update, just to let her know things were happening.  My sister arrived and we chatted for awhile (meanwhile my husband was saying, “I have to get up early in the morning for work, I’m going to bed”…..I reminded him I was in labor and he probably wouldn’t be going to work!).  We went to bed at 11:30pm, following a foot, leg and butt massage by my husband.  By this time the contractions were getting more consistent and it felt good to have pressure applied to my low back.  Hoa did a really good job at this for about half an hour, then he fell asleep.  I got up at midnight, not by choice but because my body was screaming to move.  I tried several times to lie back down or sleep in the recliner but it was impossible.  I labored by myself, walking around and around the coffee table and then leaning on the ledge during contractions (my cat couldn’t figure out what was going on!).  I kept drinking water and going to the bathroom hourly but by 4 am I needed some assistance so I woke my sister (also my Doula) and she helped me labor.  We put a call into Paula (this was definitely labor!) and my mom (who had a two hour drive ahead of her).  My husband woke up around 6 am and helped my sister with the hip squeezes she had been doing for hours.  My mom arrived around 7 am and the midwives (Paula, Krista and Erin) around 9am.  Paula checked me and determined I was 4-5 cm dilated but that some hard stool may be delaying progress so she recommended (and they administered) an enema.  It felt good to “cleanse” and felt even better to get in the tub after and have some relief from the intensity of the contractions that had been coming about every minute for hours.  At 12 pm Paula asked if I wanted to be checked again.  I said, “yes, but I don’t want to be disappointed”.  I was so afraid that after the last three hours of work I would have barely progressed but to our surprise I was at 10cm!  Immediately following the exam my bag of waters broke (gushed) and I got right in the tub.  I guess I had hoped it would be a quick process once I was completely dilated (actually I was hoping for even half an hour of rest without the pain of contractions).  Without any sleep and limited food (everything I ate or drank gave me horrible heartburn) I was exhausted.  There were eight people in my bathroom (three midwives, my husband, sister/doula, mom, 1-year old niece, and me) and I was the only one who didn’t notice the sauna-like conditions.  They took turns compressing my hips and pouring water over me and wiping my face and cheering me on with “bring your baby down”.  There were many things I was thinking.  One was that of “down”.  I thought we were to the “out” part, I had had enough with “down”.  Also, I realized how important it is to be in a setting where you are completely supported.  Had someone come in and offered pain relieving medication or surgical intervention to make it all go away, I very well may have gone for it.  You are so impressionable at that point that if someone tells you that you can’t do it, you believe them.  Likewise, everyone told me I could do it, and even when I wasn’t so sure, I believed them.  (I was also wondering why anyone would do this more than once!).

I was in the tub for almost two hours before I had the urge to push (though there was never a break from the contractions).  The pushing stage happened very quickly for me (less than 15 minutes!).  I felt most comfortable in the hands and knees position, taking care to keep my bottom under the water.  I didn’t feel like I had any control over pushing.  The need to push took over every muscle in my body, contracting for one goal.  The birth sounds I was making got lower and I concentrated on slowing my breath.  I reached down and felt the top of the baby’s head as it slipped back inside.  Before I knew it the entire head was out and I announced it with shock and amazement as the pain I felt faded into the background.  The shoulders turned (which I was surprised I couldn’t feel) and what felt like only moments later I gave a push and the baby arrived into Krista’s hands under water and she passed him through to me.  I put him on my chest and the tears started to roll.  His vitals were assessed and minutes passed before we looked to see the gender of our little one.  IT’S A BOY!  Though we had thought it was a boy it was still a surprise to know for sure.  He was so aware, checking out his new surroundings.  Paula clamped the cord (which had stopped pulsing) and Hoa cut our baby free from his placenta (which came out with a push moments later).  We slowly got out of the tub and made our way to the bed.  Hung Isaiah started nursing right away (and hasn’t stopped!).  Paula assessed me for tears (which were pretty extensive) and proceeded with stitching me up (this was the worst part.  I was so tired by this point and I just wanted to be left alone).  When the stitches were complete I went back in the tub for an herbal bath.  It was soothing on my bottom and I didn’t want to get out.  Our little boy seemed to enjoy it as well (he must have felt relaxed because he pooped on me!).

Overall it was an amazing experience and I can’t imagine giving birth in any other setting.  I was surrounded by those that love me and the natural birth process.  They understand the importance of allowing the body to fulfill its innate design to create and give birth to new life without the need for intervention.  I am truly blessed and give thanks every day for the little wonder that is my son.  He was worth every stitch! 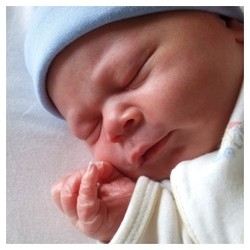