My birth story actually began 4 years ago with the birth of our first child.  I went into Carter’s birth saying I wanted a natural childbirth, but when we got to the hospital everything changed.  I allowed my doctor to call the shots; and, after many interventions and a few hours of pushing, I found myself actually relieved to be in the OR having a cesarean.  Carter’s birth was very traumatic for both, my husband, David and I.  And, when we got pregnant with baby #2 a year later, the experience was still very fresh in our minds.  We were scared, so we decided to have an elective repeat cesarean.  The birth went smooth and Mason was healthy, but I wasn’t.  I suffered from severe Postpartum depression and my milk supply dried up after 2 weeks, plus a whole host of other problems.

When we found out that we were going to have #3, we knew we had to do things differently.  I read everything I could find on vaginal births after cesarean (VBAC).  Finding a provider to assist us was not as easy as we thought it would be.  I knew I wanted a midwife at my birth and had a consultation with both clinics in Eau Claire.  And, though the midwives were happy to be my care providers, they are under the direction of physicians.  One physician did agree to attend my birth and still allow me to have the midwife group be my primary providers under the condition that I have continuous fetal monitoring and an IV.  As my pregnancy progressed though, I felt more and more like a hospital birth was not right for me and my baby.  So, I did more research.  Only this time it was about homebirth after cesarean.  I knew that would be best for us.  I showed David the research and he told me to go ahead and call Paula.  We had met with Paula earlier in my pregnancy, but because of insurance we had decided to try the hospital route.

Paula was wonderful!  She had as much confidence in me and my body as I did.  I was 32 weeks when I transferred my care to Morning Star, so it was kind of a whirl wind to prepare for our homebirth.  We had classes to attend, appointments every two weeks, and we had to prepare our house for the birth of our son!  It was almost chaotic and I thrived on it.  My estimated due date was March 21st, but my ultrasound had showed a due date of the 27th.  Well, both of those days came and went with no real contractions, not even some good Braxton Hicks.  We’d tried everything to go into labor, reflexology, a pedicure, etc.

On Sunday, March 30th, I finally gave up.  I made the boys some cookies and put a ham in the crockpot for dinner.  My contractions started around 7:30 that night.  By 11, I felt I needed Paula, so David called her.  She came over and checked me.  I was 2 cm.  I labored throughout the night.  By mid-morning, I was feeling nauseous and my labor was starting to piddle out.  I had David call Jody, my reflexologist.   She came and did some Emotional Freedom Technique (EFT) and reflexology for the nausea.   Within a few minutes I was feeling better, but my contractions were getting further apart.  Paula, Erin, and Amy, who had arrived earlier that morning, went home.

David and I tried to rest the remaining part of the evening and night.  Around 7am we called Paula again to let her know my contractions had started back up again.  Erin came around 9 and Paula around 10.   We talked about how my fears from my first birth could be what were causing my labor to progress so slowly.  I was afraid to have Paula check me because I didn’t want to hear that I was only 4-5 cm.  When I was in labor with Carter, the nurse came in at 3, after I’d been on Pitocin for almost 8 hours, and checked me.  I was 4-5 cm and she said, “I don’t want to jinx you, but you’re probably going to end up with a c-section.”

I went to the chiropractor around noon to get adjusted.  If anyone ever wants to torture a woman, just get her in labor and take her for a car ride!  At 3, Paula checked me, 4-5 but 100% effaced.  An hour and half later, Paula gave me the choice to walk the stairs or get in the shower.  I chose the shower.  20 minutes later everything changed.  I was 9-10 and ready get my boy out.  An hour and a half later at 7:37 pm, I was holding my 9 lbs. 6 oz. baby boy in my arms.  I had done it!  I didn’t need a c-section!  My body works exactly the way God made it to!  David got to cut the cord for the first time.  He had not been able to do that with our other sons’ births.  This birth has changed our lives, our marriage, and our faith in ourselves.  We worked as a team through every contraction.   It was exactly 48 hours from the time my contractions started until I held my son in my arms.  Aiden was born April 1st and though it was April Fool’s Day, it was also the first day of Cesarean Awareness Month.  Very fitting.

Thank you Paula, Erin, Amy, Jody and, of course, David. 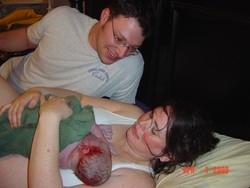