“Be careful what you ask for, you just might get it.”  I thought I was asking for what I wanted, but boy, I don’t think I was ready for it!

Being 37 and pregnant was much harder than 35 and pregnant.  This pregnancy with more stresses (being in school and having the resulting much less income) brought on more discomfort too.  The swelling started around 26 weeks.  The high blood sugars at 28 weeks.  The routine of testing my blood sugars several times a day and changing my diet to try to control it.  Then after a scary bout of being sick and not being able to eat, contractions started at 32 weeks, resolved when I got my blood sugar back up (yes it got dangerously low, go figure?), and whala, magic, my blood sugar didn’t run high anymore.  Then the numbness in my hands and fingers began- and they swelled too.  This new carpal tunnel syndrome I found out is common in pregnancy.  Could hardly hold a pen, and sure couldn’t feel a pulse (a little important in nursing school!)  As the summer wore on (thankfully a cool one), the swelling got worse, and my blood pressure began to rise slowly.  Uh oh.  At my last prenatal it was really high and my worries about having to go to the hospital to give birth were beginning to look like a possibility.  Please no pre-eclampsia!  Paula said if I could keep my blood pressure down while lying during labor it would be ok. (this position didn’t work for me with my last, but I was hoping with this one it would). I kept my eye on the due date praying it would come sooner, that the labor would be short and easy.  I felt I deserved that after my last loooooong and very painful back labor.  So as August 13 approached, I tried not to get my hopes up too high…

The morning of August 9 I awoke with contractions at 4am.  Don’t get too excited now, relax.  They pretty much started at 10 minutes apart.  I relaxed watched some tv and waited for my family to wake up.  I had been pretty cranky the last few days (or was it 9 months?) and was feeling at odds with my husband.  When we were all awake, and had breakfast we went for a long walk down the road hoping to speed things along.  Labor never really picked up, but some of them were strong enough to make me stop what I was doing, though still easy enough to breathe through.  So ten minutes apart all day.  I tried to connect with my husband thinking this could be a loooong labor otherwise, and my friend who was my doula at my last birth was still on her way home from Michigan, not due to arrive until the following day.  As the afternoon wore on, the contractions got further apart and became irregular.  Well I guess this is repeat of my last kid, maybe tomorrow.  We got in the pool around 4pm and I floated and swam and tried to relax and “find” Jeremy.  There was still a rift between us and we talked for quite a while coming a bit closer, but he was feeling pretty put out with my crabbiness and snappiness the last few days.  I had a few more intense contractions, but no regularity to them, but I decided to call Paula and give her a heads up, just in case they picked up later in the evening.  Then I lost my mucous plug.  Hmmm.  I asked her if I could come in and get checked, just to let me know I was at least dialating a little with this long day of contractions.   Jeremy said “you know she’s just going to send you home” and I said I knew, but at least this way we could go to dairy queen.  He joked about whether I wanted to drive (as I always do) but I declined and didn’t think that would be too wise.  On the way, the contractions picked up in intensity and I didn’t think Jeremy could drive carefully enough.  “Don’t slow down!  Careful over the railroad tracks!  Easy on the corners!”  The contractions were 5 minutes apart.  Rosalyn checked me and I was 4-5cm dialated.  I didn’t know whether to go home, or to stay here.  We decided to go get something to eat and pick up some snacks just in case we chose to not drive the 30 miles home.  On the way to subway (couldn’t decide what the heck to eat but didn’t think french-fries were a good idea), I was 3 minutes apart and it was getting hard to relax.  Before Jeremy scooted into the store to get snacks, I told him we were definitely not going home and I was definitely not walking around Marketplace with contractions like this.  I made a few phone calls to let folks know, and to arrange what to do with the kids.  I had wanted my 15 year old at the birth, and my 2 year old to be around too with grandma, but it was 7pm and I didn’t know how long this was going to take.  We decided that my 15 year old Ryley would stay home with the two year old Evan, and they would see them in the morning.  I was beginning to feel overwhelmed at this point, and just wanted to get back to the birth center.  No more laboring in the car!

When we arrived I was checked again, and I was dialated more.  They started the tub, and Rosalyn called Paula again.  I got in the tub pretty quick and found out it was not as deep and as comfortable as the portable birth tubs!  I tried different positions, the spray wand was good, but it took too long to get up to temp with each contraction and we couldn’t leave it running either.  Rosalyn was scurrying around gathering supplies and it was at this point I realized they thought this baby was coming soon.  I was still trying not to get too excited and thinking it would be hours yet.  The birthing crew arrived, and Jeremy’s mom showed up.  I was really feeling psyched out for some reason, wanting to go home, to take a nap, or just be somewhere else.  The contractions wouldn’t let up and there was little time to rest in between.  I could tell I was starting to be afraid of each next contraction and tried to get my mind around it, thinking there were women all over the world doing this at this time, that I could do it, relax.   It was a battle of wills between my logical mind and my emotional one.  I was afraid to admit that it hurt, thinking it would make it worse, it’s not pain, it’s progress… oh bull!  It just plain hurt.  I felt silly asking Paula if I could say ow during contractions, but I could tell I needed some guidance.  She suggested I alternate ow with open, and this seemed to work.  Paula asked if I wanted to be checked and I almost started crying, I didn’t want to find out I was only 7 cm or something, then I would want to give up.  The other part of my mind said you must be going through transition with the uncertainty I was feeling.  A few more contractions and I got checked.  No cervix.  Really?  Really?  Oh man, this was coming soon.  I got out of the tub as I just couldn’t find a comfortable position and walked the halls, tried the birth ball- nope.  The birth chair- no way.  Ok let’s try the bed because my legs were tired and I was getting scared about how long this was going to take.  No way here either.  Paula checked me again and she said he still wasn’t fully engaged- Come on baby! And asked if I wanted my waters broken.  I asked her if she wanted to break my waters and she said yes.  I took a deep breath knowing what was coming next and tried to breath through the next intense contraction begging Paula to not touch me anymore, but she needed to check heart tones and wouldn’t oblige.  Stubborn woman.    Meconium?  Of course.  I remember saying “all three of my boys pooped in me” and laughed.   After that contraction was over I remember apologizing to all the women that had to give birth lying down with their legs in stirrups as that position was ABSOLUTELY INTOLERABLE for me!  After that, the only position that came close to “comfortable” was standing.  Each succeeding contraction I pushed.  And pushed.  And wanted to go home.  To quit.  To be done.  To take a nap.  To do anything but be here.  And my logical mind told me to be here.  To push.  To think open.  To think slide.  Glide.  The more you go away, the longer it will take.  Stay here.  The battle raged in my head.  I needed lots of encouragement from all in the room and asked for it.  And got it-  8 voices said I could and cheered me on.  And I squatted. And pushed and pulled on Jeremy with my arms around his neck.  And cried.  Suddenly it was no longer comfortable to sit between contractions, or to even stand upright.  That’s when I knew the end was in sight, that I could do this.  I had renewed strength, renewed hope that this wouldn’t take all night.  Then he crowned and with another push was out with a gush and in my arms and so warm and slippery and perfect and fat and blue!

He took a little time and oxygen to pink up, but he looked in my eyes and I knew he was ok.  That moment of quiet and peace after the birth surrounded me and my baby, nothing that was happening in the room mattered anymore, nothing that happened during labor, only me and my baby and the energy that was between us is what existed.  And I smiled.  And I looked at the clock and said “well, you got what you asked for, it’s only 10:32!”  3 1/2 hours from arrival.  10lb 6oz, 22in. 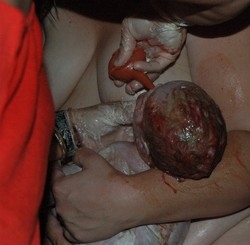