We were blessed with a new Grandson, Mateo Paxton, on Aug. 22 at 2:39 a.m. He weighed 9 lbs, 11 oz and was 22 inches long, coming into this world with a good, healthy start, although two weeks overdue. Mateo's parents, Dan and Libby, decided to have the baby at the Morning Star Birthing Center near our home in Menomonie, although they live in Mankato, MN, 3 hours away. They wanted a water birth like they had with their daughter, Maya, when they lived in Guatemala, and as natural as possible. They couldn't find that option close to home. So we said Libby and the kids could move in whenever they thought they needed to. Our son Dan had to continue working so he would come whenever he could and hopefully, in time for labor and delivery. Libby's due date came and went. During a routine exam, Paula the midwife heard an irregular heart beat in the baby. Paula had Libby go to the hospital for a test. The doctor said everything else checked out normal and they should just continue waiting and go through with delivery as planned with the midwife. Dan was very nervous about this though, so Paula said she could schedule an echocardiogram at a hospital in St. Paul if that would make them feel better. Should they? Shouldn't they? They finally decided to do it, and this test also said it was nothing to worry about. Whew!! It was called Premature Arterial Contraction and would likely resolve itself during delivery. At Libby's next appointment at the birth center, Paula stripped Libby's membranes and contractions began. By the evening she wasn't sure if it was the "real" thing," but she called Dan and said he should probably come. He got here about 9:30, just as Libby had finished a whirlpool bath, with pains that were increasing. She called Paula and explained things and was told to come in. I asked if I was invited to come and be part of the delivery and they were happy to have me come. I put the kids to bed and thankfully, my husband Lynn was home so I could go. I got to the center about 11:30. It was a beautiful, cool, rainy night. I went upstairs and found Libby working through the early pains on a ball. Dan was a great partner through this process, as well as Paula, two other midwives and a student intern. It was a pretty full room! I wasn't sure what my role should be so I mainly watched and prayed. At one point, I was told to position my hand on her back and push as she had pain. Libby has chronic back pain and I think it was to relieve the back pressure. Sometime later, she entered the bathtub and continued labor there. Dan sat on the edge of the tub and was a great help during the whole time. There wasn't much I could do so I started journaling in the next room in the book Libby wanted me to write in. I could hear the moans, groans and pleas to God & Jesus and would frequently go check on the progress. She pushed and pushed, with coaching by Paula and Rosalyn, but the baby was taking his sweet time. Paula examined Libby internally, and at some point said Mateo's hand was up beside his head so his shoulders would not come out. She told Libby to get out of the tub and get on all fours beside the tub. She worked on Libby in this position for a few minutes (seconds) and out he finally came. I heard him take his first cry as he was being wiped down with a soft towel. I was standing right by her head when this all happened and was asked to help her onto her feet and into the bed. So, here, I felt I was really needed...as I helped her to the bed. It was so heart-warming to see my son being so involved with the birth of his child. He supported Libby through every pain, holding and comforting her. Watching him hold his newborn baby as a proud papa was a sight for a mother to behold. I'm sure this is the way God planned for children to be born and I'm so thankful they chose the natural way for Mateo's entry into this world. Mateo is so blessed to have two loving parents who will be there to nurture him throughout his life. We are all very thankful for the Morning Star Birth Center for giving our family this option for gentle birth. 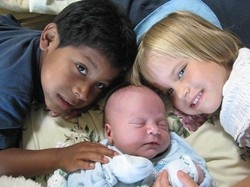