I was six days past my EDD. Charlie and I were very anxious for baby to arrive. It was so exciting, at that time especially, not knowing the sex of the baby. We couldn't wait to meet the little one. The Wednesday and Thursday night before I had had some mild contractions during the night, but nothing real serious or labor worthy. On Friday morning I also had contractions, but they were very sporadic and mild, however, I felt a lot of pressure and "heavy." We figured the baby would come over the weekend.

My sister came over Friday morning to hang out with Will and me while Charlie was at work. We walked to the park nearby and that was the first time I figured the baby might come that day. Charlie's mom picked up our dog and Will to play at her house for a while. Charlie got home around 12:30pm. My sister left to run some errands. Charlie and I sat on the couch and watched some TV. My contractions were getting stronger now so he began timing them with a pretty cool app he had on his phone that would record the duration, intensity and frequency of my contractions.

I was feeling sleepy so I went to lie down in bed for a while. At that time, lying on my side, the contractions were getting stronger. On one particularly strong one my water broke, at 2:30pm. I jumped and Charlie actually did too—he saw it happen as well and it caught both of us by surprise. I had a feeling it was go time. It was then that he filled up the birthing pool. He called the midwives and my contractions began to intensify. Rachel, one of my midwives, arrived around 3:00pm. I remember her checking with me to see how I was doing and then she asked Charlie where the coffee cabinet was. I thought that was funny. My other midwife Myriah and our birth assistant McKenna arrived not too long after. These three women were great! At about that time is when I feel my labor was the most intense.

I laid on the bed breathing through the contractions - no position seemed to ease the intensity. Suddenly my body felt like pushing but my mind didn't seem to think that was ok! I asked Rachel if it was ok that I felt like pushing. She said to try deep breathing through the peak of the contractions because she thought maybe I was pushing only because they were really intense at that time. I tried working with the deep breathing but ultimately really felt the need to push. I said it was time to get in the pool. Wow did the water feel so much better during this labor than my first! I was on my knees leaning over the side of the pool, exactly how I had pictured delivering this baby my entire pregnancy.

My mom and sister arrived and it was so nice to see them. I'll never forget the feeling when my mom came over and squeezed my hand and smiled and told me I was doing great. I was pushing strongly and after what seemed like a very short time I felt the baby crowning and Rachel told me to reach down and feel Elliot's head. That was such an incredible moment, as I could see her and feel her for the first time and in my mind the tough part was all over because I knew she would be out quickly after that. Charlie was sitting on the couch next to the pool, holding my hand, and Rachel told him that if he planned on catching the baby he better get ready. He laughed at first because he thought she was joking. She wasn't! Two pushes after she crowned, the rest of little Elle came into the world into her daddy's hands. The midwives told me to sit back in the pool so they could put her on my chest. We did not know the sex of the baby so it was at that time that Charlie had asked me if it was a boy or a girl. It was a girl!

They asked me to get out of the pool because the water was too cool for Elle. They helped us to the bed, where we laid for the next few hours. The placenta was delivered about 15-20 minutes after we got in bed. Elle latched on and began nursing immediately. That time was so special and unforgettable, knowing the hard work was over and we finally had her in our arms! The midwives continued to care for us all the while Elle was lying on my chest. It felt so great to be in the comfort of our own home during this experience. I ate some of the monster cookies I had made and drank the coconut juice sport drink and they tasted awesome. The midwives weighed and measured Elle right on the bed. We all guessed her weight---I said 9 lbs. She was 9 lbs 2 oz. The midwives gathered their equipment and belongings and left around 7ish. Our parents visited with us for a little while, and then left our new family of four to be alone. It is still amazing to me how quick, smooth, and beautiful this experience was and I will forever cherish it in my heart. 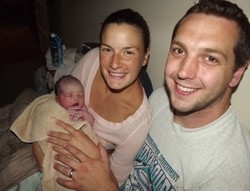