The most memorable moment of the pregnancy was when we first found out we were pregnant. Initially, the pregnancy test revealed a single line signifying a negative result. I tossed it in the trash and walked away somewhat relieved. Brent, however, had a strong sense that I was pregnant for a couple weeks already and had to be sure the test was correct. He retrieved it from the trash and...sure enough....the second line appeared. Although we were both happy with our fourth pregnancy, we were unprepared and shocked.

The biggest struggle was our living location. I had to finish nursing school in Milwaukee and would not be moving to Minnesota until 2 weeks before my due date, so we were going to be separated for the final 3 and half months of the pregnancy. We coordinated care with Morning Star midwives and a backup physician in Milwaukee. In addition to this complication, I had already prepared to run a half marathon in just a few weeks and was traveling to Peru for a medical mission trip during my 14th week of pregnancy.

I did end up running the half-marathon, traveled to Peru, hiked Machu Picchu, and graduated from nursing school without going into labor or experiencing any pregnancy complications. In fact, I felt GREAT! December 18th, 2012, just 2 days after my graduation, Gunnar Erling Babcock was born at 3:23 p.m.

I had been experiencing Braxton hicks contractions, sometimes painful ones, for several months so early labor was difficult to identify. The morning of the 18th, I sensed that this was the day. It was just a feeling but there were no other physical signs of labor. So, I carried on with house cleaning and Christmas sewing until I began to feel regular contractions that were quickly becoming more uncomfortable. Just 30 minutes after the first contractions began, I was unable to talk through them so I called my husband home and we were on our way to the birthing center another 30 minutes later.

My other labors were between 6 and 9 hours long so we expected we had plenty of time and actually planned to make a couple stops on the way to the birthing center, first at Caribou Coffee and then a walk through Target. We lived 45 minutes away and by the time we were 15 minutes away, I advanced enough that we decided to go to the birthing center before going to Target, just to drop off our supplies and see how dilated I was. Well, we had to skip target cause I was already 5 centimeters and 90% effaced.

After settling into the Chocolate Room and filling the birthing tub, the pain was growing and I began my "birthing song and dance". I managed the pain effectively by moaning, growning, and swaying. Sitting in the tub was also very relaxing. We used pillows on the edge of the tub so I could lay my head down and hold the arms of my husband or my sister in law who was also there for labor support. Only about 45 minutes to an hour later, I began to struggle with the pain, trying to keep the upper hand. Catherine, my midwife, checked my dilation and I was 9 and ¾.

Once I began to feel the pressure to push, I leaned back and waited for the familiar urge to take over me and then this labor would be over with. Unlike my first three deliveries, in which I pushed just a couple times and the babies quickly made an exit, baby Gunnar was much more painful and was not progressing down the birthing canal as quickly. I decided to move to the bed and continued to push whenever I felt the urge. About 15 to 20 minutes later, Gunnar entered the world into my husband's arms....face up! This explained the difference in pain and pushing difficulty with this labor as compared to my previous ones.

I was in labor for 4.5 hours and pushed for about 15 to 20 minutes. After delivery, Gunnar (our first boy) urinated all over my stomach. I was so excited! He looked up at me with his big eyes and was soon breastfeeding just 5 minutes later. Those moments are irreplaceable and give me tears just thinking of them. Vicki prepared the herbal bath and Gunnar closed his eyes for the first time since birth as the warm water hugged his small body. I spent a lot of time in the tub with him as this was the most effective relief for my afterpains. I laughed watching Brent chase 5 baby poop balls out of the tub!

Relaxed and rejuvenated, I slipped into some comfy nighties Brent gave me as my birthing gift. Brent has given me all the love and support that I needed throughout this pregnancy and birth. My recovery is no different as he has attended to the needs of the kids and me with the utmost care and love. Thank you!

I am so grateful to my midwives, Catherine and Vicki. They had such confidence in me and my ability to birth. I was praised my efforts and guided when needed. Brent, my husband, was given enough instruction to facilitate Gunnar's delivery without being controlled or made to feel scared or inadequate. Thank you. 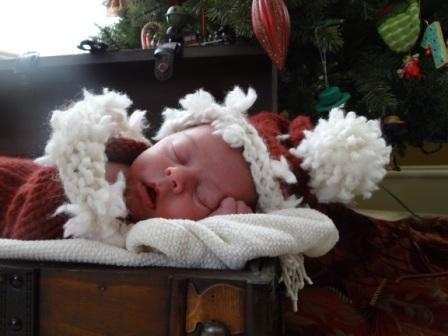