My story really starts in 1999 when I had my first son in New York with a hospital midwife. I have always had an aversion to hospitals; this was not the greatest story for me. I went into labor at 42.5 weeks. My son Bazaal was born a healthy 9lbs. My second pregnancy in 2005 was in Delaware. I started seeing a midwife at a center. Right away she found I was measuring really big. Sharp lady. ;) She sent me for an ultra-sound to see what it was. The ultra-sound showed a set of beautiful twins, only 7 weeks along! I went back to the midwife for my next appointment where she told me that she was no longer able to give us care. The state of Delaware does not allow midwives to attend twin pregnancies/births. So, it was back to the hospital for me. I had a great pregnancy. I was healthy and went for walks almost every day 'till the end. Then I was "informed" that because my babies were breech (on bottom) and transverse (top baby) that I "had" to get a C-section. I must have cried for days! I was from Minnesota and knew I could have these babies naturally if I had the right midwife! But at the time we could not afford to leave the state. :( They scheduled the C-section at 35 weeks. I told them I couldn't make it to the appointment. I would not make another appointment because I wanted to go into labor naturally. I wanted to know my babies were ready to be born. I woke up early one morning with contractions. I prayed with my husband and headed to the hospital. I was 38.5 weeks along. I cannot tell you how sad I was to give "birth" this way. My twins Asher (6lbs, 12 oz.) and (Evelyn 7lbs.) were born that morning. My husband was very strong for our family and stopped the nurses from doing anything we did not agree to. It was a battle to get the care we wanted, but my husband kept the nurses on their toes. :) I am very thankful to have him! He told me if we ever have the chance to do this again, he'd fly me to Minnesota!

In 2009 I was pregnant again. I was in Alaska this time. I called the midwives in Fairbanks and was told there are LAWS against midwives attending VBAC births. Even hospital midwives! It saddens me to see all the regulations and laws against midwives in our day and age. I have run into so much opposition just trying to birth my babies! I had a friend in Minnesota that was studying to be a midwife (She is now in medical school. We need more good doctors!) I asked her to call around. We found out the Morning Star Birth Center was opening a place in St. Louis Park. I called down and asked if they would be able to take me as a late transfer. I live in a remote village above the Arctic Circle and would have to fly down. They said it wasn't going to be a problem. What an answer to prayer! I flew down at about 37 weeks along.

The day before I went into labor I had an appointment with the midwife. I was 42 weeks along at this point. :) She told me that I had a small amount of waters between my cervix and the babes head. So, I was carrying high. She also said he was going to be over 9lbs.

The next day my waters broke when I was getting up from a nap, around 4:30 pm. It was a slow leak and I almost thought I was just peeing on myself 'till I looked in the toilet and the water was white. I yelled for my hubby Chad to get me some fresh clothes. Then I sat down and called the midwife. Chad started to get things together. I was having contractions almost right away and by 9pm we were headed to the birth center. The van ride over was intense and I was trying to get in a better mood before harder labor set in. Felixa (my doula/friend) followed us in her car and my mom met us at the center. We had our 3 children with us. They played and watched movies in the family room at the center, which has a big couch in a living room/kitchen. I went straight to the bathroom and then took a shower which always relaxes me. The contractions seemed to be coming on fast. The midwives ran me a nice warm bath and I sat in there for an hour or hours it's hard to tell. I walked around and hung from my husband's shoulders. I kept thinking that baby needed to move. I was listening to the beads on the curtains in the breeze in between contractions. I was trying to rock back and forth to help baby move. Around 1 am we checked my cervix, I was 3cm dilated and 100% effaced. Bummer! The midwife gave me some homeopathics and told us to rest for a bit. I lay on my left side in the comfy bed with my hubby. We all tried to get some rest. It was very intense, trying to just lay there. I don't know how long it lasted... hours maybe. When it got really intense I told Chad to go get the midwife. I felt like I had to poo, I went and sat on the pot. I told Savita I wanted her to check me. I was ready to push. She wanted me to wait just a couple more contractions, but I talked her into it. Yep, 10 cm ready! I asked Chad to help me up - I did not want to have my baby on the pot. :) I leaned on him for a bit, then turned to the bathroom sink. It was nice to stand, than squat to help baby move down. At 4:45am on April 2nd, Ezekiel James was born, 9lbs.12oz. He was born with his hand above his head and his elbow up on the other side. The midwife pulled his arm out straight. He was born in a diving position. That must be why I kept thinking he needed to move. Over all... The birth was amazing!

I am writing this 21 months after the fact, I wish I would have written it sooner to kept more of the details in my mind. But...I just found out I'm pregnant again so here we go...

P.S. The center had just opened a couple days before and their grand opening party was to start at 2pm the day I had Zeke! Talk about a "Grand Opening"! They had one other birth before ours earlier in the week. There were people at the center trying to get the last minute work done. Amazing! I hope they all got good naps. These ladies are hard working! They love mamas and babies! Thank you Savita, Paula and all of you for what you did for our family! I wish the best for this center. 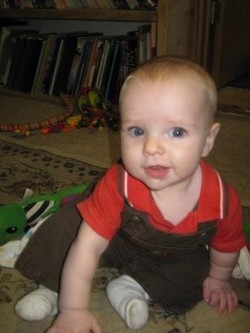