I wish I found Morning Star earlier in my pregnancy. At 29 weeks pregnant my hospital midwife started talking about inducing me when the time came so I could have 8 hours of IV antibiotics before I delivered, if I were to test positive for GBS. She tried to scare me into it by telling me she had been around long enough to see babies crash and die because of infection. This among many other things made me know for sure I was not going to have the kind of birth I wanted there. I have had 4 other hospital births and they went OK but I had to fight in my most vulnerable moments for the staff to leave my babies and I alone and not do all the routine things they do out of hospital policy and habit. I was just a patient. Two of the four births were attended by people I had never seen before and never saw again. I tried talking to my husband, Ben, about having a home birth but he refused again. I had wanted a home birth for my last 3 babies but he was always concerned something would go wrong. I considered purposely waiting too long during labor so we couldn't make it to the hospital in time. I even started gathering supplies but I didn't want an unassisted chaotic home birth with a freaked out husband who ended up calling 911. Then I heard about Morning Star opening up their St Louis Park location when I was about 32 weeks and wanted so badly to switch. It took more than a little convincing of Ben to have an out of hospital birth but he finally relented and I made the switch. It ended up being plenty of time to get to know the midwives and build up trust. I dreaded going to my prenatal appointments before switching to Morning Star but now they were enjoyable(and long!).

I thought that I was going to have this baby about 2 weeks before my due date which was June 1st. So every night when I went to bed I expected to wake up in the middle of the night in labor. Thursday, June 3rd, I finally woke up with those familiar "real" contractions that were very strong and about 3 to 4 minutes apart. It was about 3AM so I waited until I had about 3 or 4 before I woke up Ben. They seemed to be coming pretty often and my last labor was only 3 hours so we decided to call Paula right away since she lives in Menomonie. She said she'd be ready to leave in 8 minutes and then it would take her an hour and fifteen minutes to get there! Ben called my dad over to stay with our 4 other children while I gathered a bag full of food to bring with and ate some yogurt and strawberries. Seems like a funny thing to do when contractions are 2 to 3 minutes apart. We left our house and drove the 10 minutes to the birth center. We still had to cross the same railroad tracks that we did during all my other labors when I delivered at Methodist hospital but this time it wasn't too bad crossing them. I was so happy to not be going to the hospital to birth this baby.

When we walked in to the birth center, a little after 5AM, we dropped off our food in the kitchen and then went back to the room I had picked beforehand. The chocolate room. No babies had been born in it yet. The tub was all ready for me and Paula, Shayna, and Heather were there waiting for us. It finally hit me that I was going to have a new little baby very soon. My contractions were not coming on very strong or very often anymore and I was really worried I called everyone in way too soon. I walked around in the building for awhile and they finally started to become strong again. Then it really helped to lean over something that was countertop height and move my hips side to side during contractions. I hung out in the room moving from the bed to the bathroom to the side of the tub before deciding they were definitely strong enough to get in. Such relief! It was a little awkward trying to get in a comfortable floating position so that I could totally relax my entire body during the contractions but I finally did.

How wonderful to not have to ever be stuck in a hospital bed hooked up to an electronic fetal monitor, no one doing cervical checks to make sure I was progressing at the correct rate, and no IV in my arm. No nurses laying the bed back when I wanted to be upright. No automatic blood pressure cuff left on my arm. No feeling like I was a sick patient needing treatment. At Morning Star the midwives were close by for support but let me labor how I wanted on my own. They checked the baby's heart tones pretty often with the doppler and took my blood pressure and temperature and pulse but were not intrusive at all.

The contractions were getting really strong and I could tell they were doing a good job of opening up. They were fairly manageable in the tub but I started to get really annoyed if anyone was talking during them. I needed quiet to concentrate on relaxing my body. I was hoping this meant the end was near. This part was dragging on longer than my last labor. I thought I needed to empty my bladder to make more room for the baby to come down. Paula said I could just go in the tub if I wanted but I got out to go to the toilet. I had a really strong contraction while there and my water broke with a gush right in the toilet. My first time experiencing my water breaking on its own. I figured things would get really uncomfortable with that cushion gone so I wanted to quickly get back in the tub. Paula listened to the baby's heart tones and they had dropped really low so I got my only cervical check to make sure there was not a prolapsed cord. Ouch. No cord but I was fully dilated and baby was at a + 3 station. Baby's heart rate was still low so I had some oxygen to help get it back up. I tuned everything out but I think I was being encouraged to push my baby out. I really hate pushing though. I didn't have the overwhelming urge yet but I tried a few small pushes. I started to get so hot and a little panicked. My hands were getting tingly and numb. I felt a nice cool washcloth on my forehead. It was so refreshing. I was hoping I would get lucky and finally have a baby that just slid out with a water birth, like a few stories I had read. But I had to push. Pushing was still pretty intense even in the water. I don't understand how some women can say pushing feels good.

Paula asked Ben if he wanted to catch the baby. He was a little hesitant but she said they could do it together. I wanted to be upright when I gave birth but my body automatically went back so I was more sitting and leaning back. I could feel the baby coming down with my small pushes so I finally gave in and pushed harder. I reached down to feel my sweet baby's head. Ben and I each had a hand on the head as I pushed. I heard Ben say he felt a wrinkled forehead and then a nose as the baby was coming out. The head was out and the cord around the baby's neck. Paula slipped it over the head and then I pushed the shoulders out. I thought the rest would slip out so I leaned forward to pick up my baby as he came out but I still needed to push the rest of him out. Ben and Paula lifted him up to me. Ben said we have another boy! It was 8:21AM.

He didn't seem too interested in breathing though and he wouldn't open his eyes. Paula flicked his feet and suctioned his nose and mouth to get him a little mad so he would take some breaths. They held oxygen over him and I started to get a little panicked when I saw the white baby board (a hard surface that they use if they need to resuscitate a baby) coming over. But then he started to pink up and let out a tiny cry. The placenta detached really quickly and I pushed that out. Paula clamped the cord and had to talk Ben into cutting it. I thought he would be a pro by now but it still makes him squeamish. We soaked in our baby for a few minutes and then I got out of tub and into the bed to snuggle for a while. We had some eggs and toast and let our family know about our baby boy that we named Andrew James. Andrew and I had a bath, relaxed a couple more hours, continuing to have our vitals checked regularly, and then we were ready to go home.

This was by far my best and most enjoyable birth. I am a little sad that my other births were not with birth attendants that trust that birth is a natural, normal body function and that women's bodies were designed to birth our babies with little or no intervention. They were close by when we needed a little help but didn't take over. How wonderful to be able to follow my own birthing instincts and have privacy and support all at the same time.

Thank you for such a great experience. 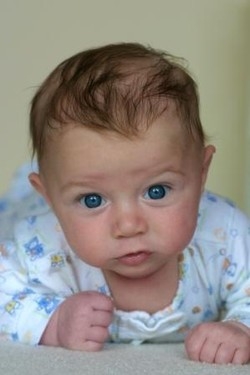