I'd been having mildly uncomfortable Braxton Hicks for the last week or so. I woke up to my alarm on Tuesday morning at 5:30 and headed downstairs to take a shower, and noticed some bloody show. I took a shower and noticed that the contractions had changed and were low in my abdomen, rather than high in my belly. I called in sick to work and went back to sleep with Jake. We slept in until 8:00 or 9:00 and then I made pancakes. We spent the day at home timing contractions and preparing the house for our new arrival. Jake finished a project in the kitchen; I baked oatmeal chocolate chip cookies. We reflected a bit on our lives up to this point and how they might change in the coming hours. Jake became so emotional he had to write a letter to The Bean (our in-utero name for Adele) just to sort out his thoughts.

It had been extremely windy all day, associated with an intense, record-setting low pressure system. Perfect for the child of a meteorologist! That night we tried to go to bed and sleep, but I was not able to snooze through contractions. Finally at 11:00 PM we called Catherine and told her we were coming in. The 45-minute drive from Monticello was a lot less uncomfortable than I thought, despite dodging tree branches and other debris on the roads scattered about by the high winds. We stopped in Minnetonka and dropped off our dog, Sebastian, at my parents – they were so excited. Catherine met us at Morning Star getting the room ready. She checked me and I was 2cm and 90% effaced. She sent us home to labor some more. We were bummed. Rather than drive back to Monticello, we went to my parents in Minnetonka, which was only a short drive away.

We arrived back at my parents sometime around 2:00 AM. We headed downstairs to my old bedroom – I guess things really come full circle. Jake slept and I tried to, but pretty much failed. All I could do to be semi-comfortable was lie in child's pose on the floor, except eventually my legs would fall asleep. I dozed a little between contractions until morning. Once Jake awoke and started helping they were a lot more tolerable. My mom brought down some oatmeal and then she stayed to help as well. We were not planning on that, but I am really glad she did. I started humming/moaning through the contractions, which helped me relax. I started telling myself that they would have to get more intense to be effective and to let that happen, not resist.

Jake called Morning Star around 8:00 AM and Paula picked up. She told him that when I felt it in my butt, it was time to come in. Around 10:00, I felt it and I was clearly in laborland – my dad tried to help me get out to the car but I was outside and buckled before he could even get his shoes on. My mom drove us while Jake helped me, mostly by pushing as hard as he could on my back. I think I had four contractions in the car, which were pretty uncomfortable. Jake pushed and pushed on my back, eventually chafing it enough that he was worried I would have a bruise.

When we got to Morning Star, Paula, Catherine and Angel were there. It was an admin day for them. We talked to Paula before she checked me and she said "honestly, I don't think you are ready". Then she checked me and said "Well, missy, you're 8 cm". I think my Mom was the most excited to hear that. Jake insists he was even more. Paula also said my bag felt thick, which was why it hadn't broken yet. I labored on the birth ball, in the shower, and on my side. I ended up in the tub, which felt really good. I put my head down on the side and sat cross-legged, and relaxed enough that as a contraction would end I would occasionally fall asleep and then everyone would sit really quiet until I woke up. Waking up to a contraction starting was almost worse because I wouldn't be ready for it. Finally Paula asked me if I'd urinated in a while and I hadn't. They tried to get me to go in the tub, which I would have done if I could but I just couldn't let it go. So Jake helped me out, I went to the toilet, and the moment I sat down – "pop! Phsssssss" my water broke. It was clear. I stayed on the toilet through a contraction and felt a small urge to push while there. The birth assistant had switched from Angel to Kelli and Kelli told me that at one of their other births the woman had her baby right on the toilet. That got me off.

I tried squatting against the wall, which brought on strong pushes but my legs were too tired to hold me up. I tried the birth ball, with the same result. Finally I lay down on the bed on my side. Jake was still helping a lot by pushing on my back. The pushing contractions were a lot shorter and didn't hurt as much, but they were a lot more work. Jake would hold one leg and my mom the other and they would provide counter pressure while I pushed. I was making a lot more noise now. Paula suggested I hold my breath and use my diaphragm to push; that helped too. I rested well between contractions. I pushed for about an hour. Finally Paula told me to reach down and feel my baby's head – that was amazing, and gave me a lot of energy to keep going, knowing that I was making progress and was going to meet my baby soon. It still took a long time, and a lot of work, to get to the point where she was close to coming out. I know lying on my back/side was not the most efficient and I could feel that, but I was too tired to try anything else.

Finally they had Jake put his hands on me to get ready to catch our baby. They also kept squirting me with warm olive oil, which felt pretty good. Paula and Katherine kept telling me that I was stretching really well, nice and slow. The head slowly started to appear, but would retract between contractions. This drove Jake crazy. I reached down and felt her big head one more time before she began to emerge. At one point, she was out to her eyebrows in between contractions, which felt terrible, but Jake said he could feel her nose through my skin. On the next push I got her head fully out. Then Katherine had to check for the cord, and that felt the worst of all – waiting between contractions with her head out and her body in. The next push got her all the way out. Jake lifted her onto my belly, and she cried right away. It was 2:43PM. In all the commotion, Jake had to be reminded to look at whether she was a boy or a girl – he was so surprised to find her a girl! The cord wasn't long enough to move her up to my breast, so they toweled her off on my belly. I touched her in amazement. I told her "happy birthday, my love." Katherine clamped the cord after it finished pulsing and Jake cut it. Then I got to hold her up to my heart where she belonged. She was amazing already, so perfect – her head was a little cone-shaped but everything about her was beautiful. She was warm and squirmy and slippery. We named her Adele. Paula suctioned her out, but she said everything was fine. The midwives delivered the placenta while Adele nursed for the first time. Jake and I agreed on Celia for the middle name. Jake was about to go out to tell his parents that she was a girl when we heard his mom, Pat, on the phone outside the door – "it's a girl!" It turns out Paula had gotten them chairs and they had been sitting and listening just outside the door the whole time I was pushing! That was great!

Jake and I spent an hour with Adele cuddled in bed together, just looking at her and each other in amazement. She was so beautiful. I felt a little loopy for a few minutes and Jake said he had been feeling nauseous and had had a stomachache since early in the morning. The grandparents made us a couple of plates of food – I have never been so famished in my life. I took a quick shower, which felt really good, and climbed back into bed before we let the grandparents in to meet her. Jake's sister Andrea came too. We were selfish and didn't let anyone else hold her, which was hard but I am glad of it. All her vitals were great, and mine too. Paula tried to do her footprints but the inkpad was dried up, so my Mom and Dad ran to Target to get a new one. After some more bonding and paperwork, it was time to get ready to head home. To Adele's vocal dismay, we put a diaper and a sleeper on her. By 8:30 we were packed up to go home! The winds were still howling and a few of the season's first flakes of snow fell as we got in the car and ever-so-cautiously drove home. Would anyone else on the road imagine that we had a little girl barely four hours old in our car? We hardly could believe it ourselves. We arrived home and I was ushered to bed with Adele. Jake joined us minutes later and we slumbered. 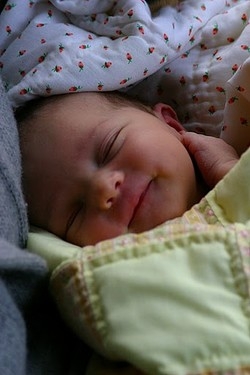