As first time parents, everything we learned had prepared us for how long labor could be. We were not prepared for how short it could be! Here is Margo's birth story:

Ellen: At 1:45am on December 13th, I was startled awake by my water breaking in bed. The day before had been totally normal, so I was surprised and suddenly unprepared. I went downstairs and sat on the toilet, wondering what I should do. I didn't feel like I was in labor. I was rattled, and started to cry... I was certain baby would be late, and here she was, two weeks before our guess date, ready to make her entrance.

At 2:00am I had what felt like menstrual cramps and a low backache that must be early contractions. They started off fairly mild but quickly got more intense and much more frequent than I expected. Scott started to write them down, in order to give Paula the most up-to-date information.

We called Paula at 2:24am to let her know what had happened so far. She said, "Your body has a lot of work to do and that you should try and relax. Scott doesn't need to time contractions yet, he should try and get a couple of more hours of sleep, but you probably won't be able to."

Scott: "Relax" and "go back to bed" seemed like the last things that I'd do while my wife was going into labor. But Paula did say to stop timing, so I put away with stopwatch and went about packing. I got up the car seat from the basement (which was still in the box) and realized that I had no idea how to install it. Grab the instruction manual...check. Ellen was trying to tell me to go back to bed, but I knew that I would feel better if we had the food and everything else ready first.

Ellen : As Scott packed, my contractions got more intense. They weren't ever a minute long, but they were only ever 2 minutes or so apart, and became almost continuous (or at least it felt that way). Shortly after talking to Paula, the contractions started to get massively stronger. It quickly got to the point where I couldn't talk through the pain. I started making agonized screaming noises that I hardly recognized as coming from myself. I would stand in the bathroom, bracing against the sink. I tried being on all fours on the bathroom mat, tried sitting down... nothing was remotely comfortable, and it quickly started feeling unbearable. I would take off my sweatshirt, and then hurry to put it on again when the contraction passed and I got a chill. I could see Scott running around the house, and he impressively tracked down requests that I'd make: "Can you grab my green pajamas?" "Do we have outfits for her that are clean?" He would also come in whenever he could tell I was contracting to try and help me relax.

Scott: When I'd see Ellen in pain, her whole body would tense. If I physically touched someplace on her body and coached her to, she would relax, but without it, she would be completely rigid.

Ellen: I remember being shocked by the ferociousness of the pain, and thinking that if this was pre-labor, I didn't think I could do it. I looked at Scott, and said "this is going to be really hard." I was sure that he was thinking that I was the biggest sissy, because if this was just the beginning and I could hardly handle it, what were we going to do when it got really difficult. I was so worried that it was just starting, and I had hours and hours of this in front of me. I felt so unprepared. And that's about when I started to feel a strong urge to push. At that point that I told Scott to call Paula back.

Paula told me later that when the husband calls, that's a sign that things are serious. I told her how I felt like pushing, and she said to come on in. I didn't want to come too soon, and she said, "If it's too soon, you can go back home."

I threw on my bathrobe for a coat, and we were in the car. I climbed in back on all fours, kneeling on the backseat, bracing my hand against Scott's headrest. I couldn't see out the window, but could picture the route and could kind of tell where we were along the 20 minute drive.

Scott: it was so hard to try to support you, and all I could do was listening to your breathing and your pain. I remember saying things that seemed so unhelpful, like "relax into it." And repeating when you started saying through each contraction, "Don't push, just breathe." Even though its 4:00am, at the first red light, I stopped. Ellen asked, "Why are we stopped?" and as the kind of person that asks himself, when is it ok to run a red light? I had found that answer. After that I treated stoplights as stop signs.

Ellen: Spending the whole ride trying not to push, I felt such relief when we made that last U-turn. Paula met us in her scrubs and ushered us back to the Chocolate room. The first thing that I remember her saying was "Ok. You're crowning. Reach down between your legs and you can feel your baby's head."

Scott: While Ellen got undressed and climbed onto the bed, I thought I needed to get all of the supplies that I'd so carefully packed in from the car. But Paula stopped me and said, "Take off your jacket. We're having a baby."

Ellen: For the next 15 minutes I remember half sitting, half leaning on the pillows with Paula telling me that I could put my foot on her shoulder.

Scott: I climbed onto the bed with Ellen and Paula told me to grab Ellen's leg and give some tension. I looked down and could see the beginnings of our baby's head just starting to come out. Wow! We were really having a baby right now! I kissed Ellen and told her that everything was going to be fine. Paula told Ellen to just go with her body and when the urge to push came she encouraged her. All of the sudden the head was out and Paula told Ellen to stop pushing. She did a finger sweep for the umbilical cord and helped the baby rotate. Ellen's face was of pure shock and a little relief. She looked like she could not believe that she was really having a baby already. The rest of the baby was delivered and it was bluish-gray. Ellen asked if that was normal and Paula affirmed that it was. She placed our child on Ellen's breast and I kissed her again, telling her how proud I was of her.

Ellen: I remember asking "Is it a girl?" and Paula saying, "Let's check!" We indeed had a girl and here she was grimacing and breathing on my chest. Paula started to massage my uterus to help it start contracting, which was a little painful but nothing like the previous contractions. The placenta delivered soon after with another push from me. All I could think was, "Was it really done?"

Scott: Here was our precious girl. Ellen had endured the ordeal and had brought into this world such a precious little life. This whole process is the closest thing to a miracle that I have ever seen; it was really beautiful. Paula delivered the placenta and then once it had stopped pulsing, she clamped it, passed me the scissors and let me cut it. All of this was so surreal. We had a healthy little child and here we were enjoying our first minutes as a family.

Ellen: It was a wonder. I'm still shocked at how fast it seemed. I only wish that I had known when I was in such pain at home in my bathroom that that WAS labor, and not the pre-labor I had thought it was. It seemed great afterwards for it to be so short, but at the time, when I thought I had many hours to go, it was unnerving. The moral of our birth story, then, is to prepare yourself mentally for a long labor OR a short one! 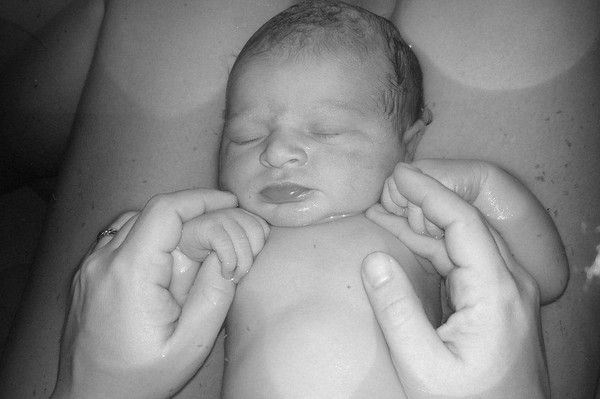