Our baby boy barely made it to the birth center before he came into this world.

Early labor had started around 5:30am on Monday morning. I sent my husband a text just to let him know and to also let him know I was going back to sleep for a while. The contractions were like mild menstrual cramps at that point and it stayed that way for several hours. Contractions were getting stronger around 2:30pm, I remember rocking through them laying in bed. My husband had come home from work by then and he had called Morning Star to let them know I was in labor.

Then... my water broke at about 5:30pm. It did feel like a balloon popped inside of me. It wasn't a large gush of water as some women experience. Things intensified at that point. My contractions were lasting a minute and were only 2 minutes apart. My husband called Morning Star and explained what was going on. He asked if I wanted to talk to Paula, I said no, not because I didn't want to but because I couldn't; I needed to concentrate. After he got off the phone and he explained what was said.

Within a couple of minutes I started to cry and I said, "I don't understand why they are not telling us to come in." I was yearning for the emotional support and to be able to use the tools at Morning Star we had been talking about for months. However, I remember being told early in my pregnancy that if we arrived at the birth center too early that we'd be sent home and I didn't want to be "sent home." So in my first-time-doing-this brain, I guess I was waiting for an invitation or instruction of sorts before we left (In hindsight, I should have trusted my instinct and told my husband we needed to go).

I was in active labor (probably starting "transition"). I was going from room to room to try to find a more comfortable position; didn't happen. I remember questioning if I could do this or not. I even told my husband about my self-doubt but he reassured me that I could; which was all I needed. We attempted to get me into the car a couple of times, but I would get out as soon as I got in. My Chevy Impala suddenly felt like a Smart Car. Crap. I said we needed to take the truck, which meant that hubby needed to make room and also transfer everything we needed to take with into his truck. Between trying to get me into a vehicle, cleaning things out and switching things over, it was probably about an hour process. Finally, we were on our way.

I was in the backseat concentrating on breathing and just trying to make it to the birth center. Both my husband and I were acutely aware of every hospital on the way. That was NOT a fun truck ride!! It was one of the longest hours of my life (an hour drive to the birth center). I had actually started pushing in the truck. Not because I wanted to have my baby in the backseat of a Ford truck, but because my body told me I needed to push. I had a Tupperware bowl in the backseat in case I threw up (again) and I was wondering if he was going to be born in that. When we finally arrived, I walked straight into the bathroom of our birthing room and checked... sure enough... he was crowning. I came out of the bathroom and squatted on the floor. Paula checked me and confirmed that she could feel his head. Dana, the birth assistant, drew the water in the birthing tub and I dropped my flannel shirt and baggie shorts and hopped in. My husband and I had planned on him being in the tub with me, however, we didn't have a lot of time to figure things out. He asked what I wanted him to do, and I said that he could sit on the side. It worked great because I leaned over on his knees part of the time. And during the "ring of fire," I bit his shorts (only his shorts). I knew that I was tearing, which was one of my fears, but at that moment there was no choice. The whole time Paula was verbally supportive and letting me know about the progress.

He was pulled out of the water and put on my chest. It is a surreal experience. My husband cut the umbilical cord. I stayed in the tub for several minutes holding my little boy and resting.

There were no complications with the birth and baby was fine... beautiful.... adorable...and healthy.

Now the next step.... the placenta. Generally, it doesn't take that long for the placenta to follow a birth. However, mine decided to takes its sweet time which eventually caused some significant complications.

Paula noticed that the placenta wasn't cooperating so she recommended I move onto the bed; it was probably easier for her to monitor what was happening. I had a significant amount of blood loss, I remember thinking the placenta came out a couple of times only to be informed each time they were just large blood clots. Paula had informed us that we might have to be transferred to the hospital if the placenta didn't come out soon. We discussed our options and decided collaboratively that Paula would try for a while longer before transferring me. It was obvious that the situation was serious but at no point did it feel like Paula was panicking. She was calm, professional and determined. Prior to its final exit, I had lost a lot of blood (approximately 2,400 cc's; average blood loss during delivery is about 500 cc's) which caused my blood pressure to go down, something like 80/40, and my pulse to go up. I was light headed and briefly passed out once. I think we were all getting a little scared. Paula again warned us that I might have to go to the hospital. She consulted with Dr. Hartung about what was going on. I was given a couple of shots, I believe to stop the bleeding and also to induce contractions to encourage the placenta to come out. It took just over an hour and a half for the placenta to make its exit.

Paula had given me an IV to replenish my fluids. I was observed for several hours until my blood pressure went back up and my pulse returned to a normal range. Meanwhile, I was laying on the bed with my beautiful baby and enjoying the bonding time. We were finally discharged at 11am the next day when my vitals were stabilized. During the entire process, Paula did a great job at keeping us informed on what was going on and collaborating with us on decision making.

Tuesday I was doing ok, weak and sore, but ok. We had a few visitors and I took it easy.

Wednesday morning when the birth doula came out to see how we were doing, she took my blood pressure, pulse and checked my hemoglobin. All were waaaay off again. I was so weak I couldn't stand up by myself, and when my husband lifted me to my feet, I started to pass out-every time. Time to go to the ER. Long story short, we went to Mercy Hospital where I received 5 bags of saline solution and 2 bags of blood. This combination brought my levels back to a comfortable range and I was discharged around 10:30pm.

Recovery had been delayed due to the above situation. I had a significant amount of pain due to the blood loss, I couldn't walk, change my baby's diapers or clothes. And since I was nursing, I couldn't get any pain meds. My muscles were reportedly deprived of oxygen by being so low on fluids that it took much longer to recuperate. One step at a time.... literally. Eight months later, I am still healing emotionally.

It helps that I have the support of my wonderful husband and also have my beautiful "reward" by my side. 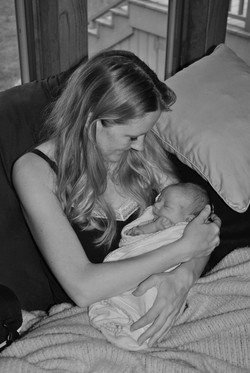