When Things Don't Go As Planned: Our Birth Story.

My husband and I can only be described as crunchy. We make everything from scratch, from foods, clothing, soaps, candles, flour, furniture and more. Heck, we even built our own birthing tub. So when we started talking about children it was the only logical choice for us to choose a natural birth. We did our research and picked out Morning Star before our son was even conceived.

The day we found out we were pregnant was one of the happiest days of my life; however that happiness was short lived. It seemed that every step of this pregnancy was plagued by one event after another. I stressed and worried my way through the entire pregnancy. It's a wonder that I did not get an ulcer on top of everything else. First there were the E-coli infections and the discovery of Group B Strep which meant that I would have to have an IV at birth. We were ok with that, even though it meant saturating our unborn son with yet another medication. Then came the discovery that I had gestational Diabetes. I was scared that I would have to transfer out of Morning Star's care and into the care of a hospital. We fought back and controlled the Diabetes with a strict diet throughout the remainder of the pregnancy. We thought we were doing well and through it all the wonderful staff of Morning Star was by our sides encouraging us along the way. Then six days before our estimated due date things took a scary and drastic turn for the worse.

We arrived at Morning Star for our last prenatal appointment. There was protein in my urine culture and my blood pressure was a little high, not drastically high, but high enough that coupled with the protein my Midwife (Catherine) was concerned She sent us to a hospital for observation. Little did we know then that we would not leave that hospital for several days. When we arrived at the hospital my protein count had shot up to 10 times what it had been and my blood pressure was so high that they were calling me preeclamptic. I was informed that I was at risk for organ failure, seizure, stroke, and would have to be induced. Tearfully I called Morning Star and was told that with this turn of events that I could no longer have my son with them. I was now High Risk and there was no other option. My life, and the life of my son, was literally on the line.

The doctor wanted to induce right away, but by then I had spent the entire day crying at the hospital and was worn out. I knew that I would not have the energy to have my son without drugs or even a C-section. The wonderful Staff of Morning Star spoke with the doctor and pleaded for them to just give me time to wrap my head around this and even though I was not allowed to leave the hospital I was given the night to rest (Thank you Catherine). I asked the doctor if I would be able to at least labor walking, standing up, and in a tub. I was told that I could do all of those things. Grudgingly I allowed myself to be admitted.

The next morning I was even more tired. The night was spent in fear for the next morning and no small amount of tears was shed. I blamed myself. I must have done something wrong, but try as I would I could not figure out what I had done. My doula drove all night to come home from Chicago to be by my side and even my midwife (Catherine) came to be with me through this next and final stage. Genetics were to blame, and no one else. Plain and simple.

In the morning a new doctor came in. She was briefly filled in on what had gone on. She wanted to know if I was excited and did not understand why I was crying and continued to as she broke my water. She thought I was over reacting and did not understand that this was not what I wanted for my son. I had wanted him to be able to come into this world at his own pace; I had wanted him to come without his little body being saturated with drugs. How could I possibly be excited knowing we were at high risk and not knowing if we would make it? My blood pressure continued to rise and I was not allowed out of the hospital bed. I was not allowed to walk to labor, stand, or use a tub. I had to give birth on by back, which forced my son and me to work harder to get him around my pubic bone. At some point I heard Catherine call out not to push, so I fought my instincts and held through that contraction. That warning saved us; I later found out that they were trying to take a blood pressure reading during that contraction and if my blood pressure had been just a little higher there would have been more interventions.

Approximately 10 hours after my water was broke our beautiful son Edric Liam Fritz made his way into this world. 8 lbs 5 oz and he was perfect in every sense of the word.

My beautiful son is resting on my chest as I type this. He and I are healthy and whole. We owe a huge thank you to everyone who helped him into this world and helped to keep me here as well. We both made it due to your love, care, watchful eyes, and caring hands. There is not a doubt in my mind that if we had attempted our home birth one or both of us would not be here today. Our birth was not what we had planned, but it is what we needed to survive and be whole. Edric was born healthy and with minimal interventions. To date he has had no other medical complications. My body knew what to do; it just needed a little help. I did not fail. Hearing my son breathing against my chest right now is all the affirmation I need to testify to that.

Sometimes things don't work out the way we plan, but they work out the way they are intended to be. And sometimes, just sometimes, we need to allow ourselves the permission to let someone else help us along the way. Thank you Morning Star staff (A special thank you to Rachel, Vicki, and Catherine), and thank you Doula (Laura). 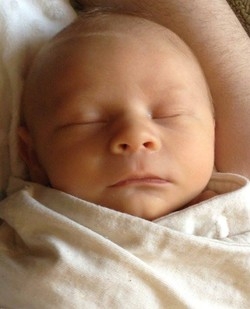